Delay Lama is the first VST-instrument to offer both vocal synthesis and a real-time animated 3D interface. Its advanced monophonic vocal synthesis engine enables your computer to sound just like an Eastern monk, with real-time, high-resolution control over the vowel sound. What’s more, the plug-in window displays a 3D animation of a singing monk, that reacts directly to your input! 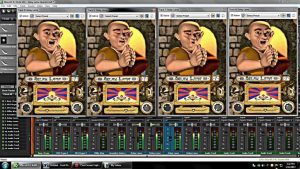 In addition, Delay Lama offers a simple but effective built-in stereo delay (you’ve guessed it), to give it just that extra bit of impressiveness.

Delay Lama Crack makes your computer sound and looks like a singing Tibetan monk. Delay Lama is the first software synthesizer that features both vocal synthesis and a real-time 3D animated interface, which dynamically reacts to musical gestures from the user.

To control the pitch and vowel sound (ooh-ow-ah-ayh-eeh), either a MIDI keyboard with pitch bender, or the built-in XY-controller can be used. For an extra mystical effect, Delay Lama has a simple stereo delay.

The instrument can be controlled either with a MIDI keyboard, in which case the pitch bender acts as a vowel manipulator or with the built-in XY-controller, which allows simultaneous control over both the pitch and the vowel sound. Other controls include the portamento speed and the level of the delayed signal. All parameters are controllable via MIDI, and all incoming events are handled with sample accuracy.

Although Delay Lama is freeware and can be distributed freely, AudioNerdz would like to encourage satisfied users to make a donation to the International Campaign for Tibet. To find out more about the situation in Tibet, where you can also easily make a donation by online credit card payment. It’s really great for your karma.